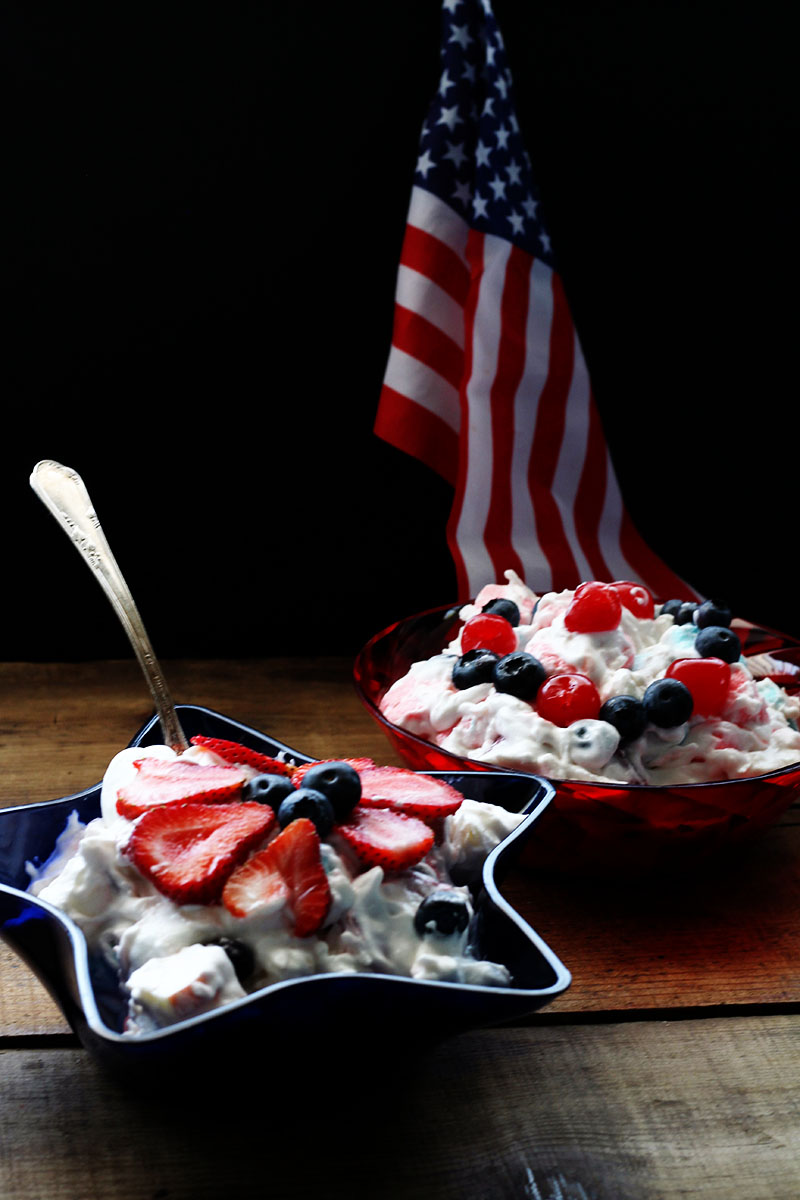 The marshmallows were so cute and I love ambrosia so I thought that it would be fun to put the Starmallows in an ambrosia salad. Staying with the red, white and blue theme, I went with strawberries, blueberries, red apples, coconut, and maraschino cherries.

The ambrosia turned out so creamy and sweet. It is hard to believe that there is only 1 Tablespoon of sugar in it. Isn’t it wonderful how naturally sweet fruit can be? I can’t wait to share this red white and blue ambrosia salad on the 4th of July in a few days. 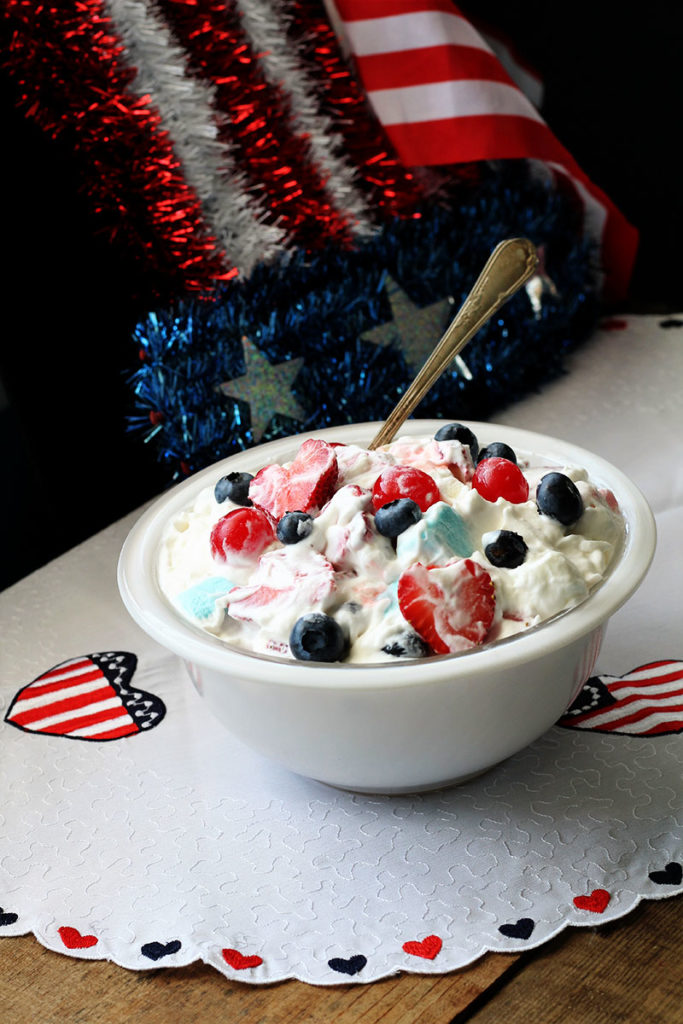 What Ingredients Do I Need For Red White and Blue Ambrosia?

Here’s a list of ingredients you’ll need to make this ambrosia (scroll down for the full recipe):

How Do I Make Red White and Blue Ambrosia?

Here’s the simple steps you’ll follow to make this ambrosia (scroll down for the full recipe):

How do you celebrate the 4th of July? We are so blessed to be able to have the freedom to an equal opportunity for life, liberty, and the pursuit of happiness.

One of my brother’s was born on the 4th of July. It was funny, when he was young, he thought that there was a parade for his birthday every year. We usually went to the parade in the county seat where we went to school.

It was about 30 miles to the parade, but it was so much fun. We always knew a lot of the people that were in the parade and we got candy from people who threw it from the floats. There were always a lot of floats and horses in the parade.

And drill teams from the 3 high schools that were in the county always participated in the parade. The Caribou county rodeo royalty for the upcoming county fair always rode their horses in the parade. It was fun to get away from the farm work for a few hours, but we had to go home and haul hay after the parade.

Have you ever heard the phrase “make hay while the sun shines”? We lived that phrase. When I was a child, the weather forecasts were not as sophisticated as they are now, and did not project out more than a day or two. We knew that the hay needed to be stacked and stored before it got rained on. 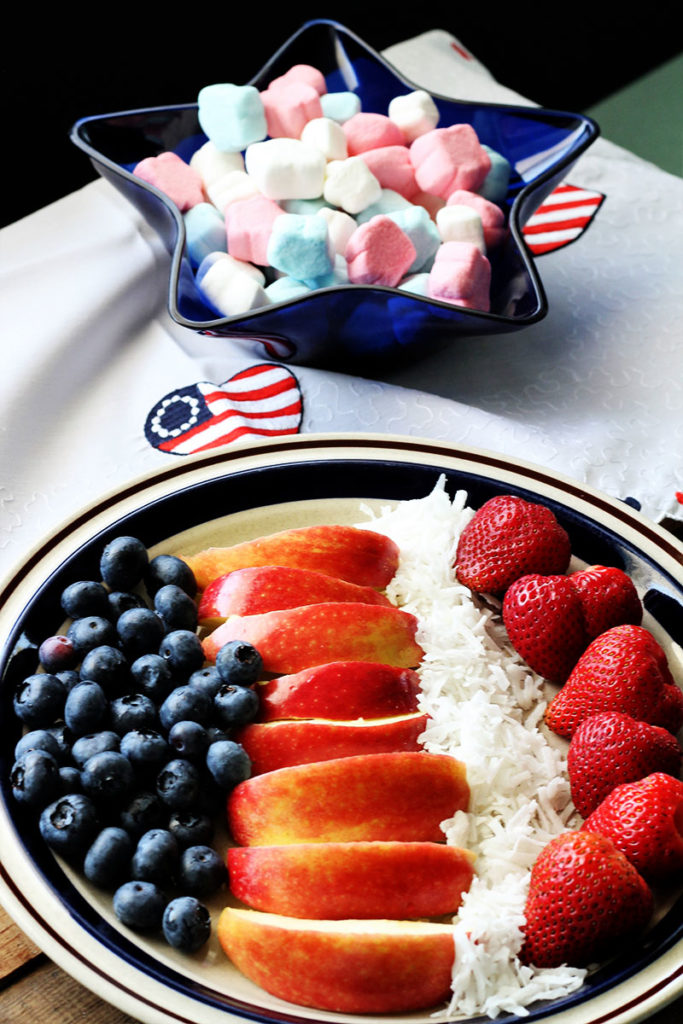 What Are the Best Fruits to Include in Red White and Blue Ambrosia?

My brother eventually decided that a Summer birthday had it’s drawbacks on the farm, because he never got any birthday parties. It is kind of interesting, but this brother still has to work on the 4th of July and he isn’t even a farmer anymore.

He now delivers and unloads food related products for a large company. He goes in early in the morning so he usually does get home in time to have a nice cookout with his family. And every so many years the 4th of July falls on a Saturday and he doesn’t have to work like he did on the farm. What 4th of July memories do you have?

Hopefully, you get a holiday on the 4th of July and are able to enjoy some nice festivities. But if you don’t, I hope that you at least get to share a nice meal with family and friends. With any luck, someone will show up with a nice red white and blue ambrosia salad for you to enjoy.

Some More Fruit Salads For You: