Fruit Salsa and Cinnamon Chips makes such a nice snack for those hot summer afternoons when you just need something to eat. The fruit salsa is so refreshing. You will love these together.

Go ahead and try making some fruit salsa and cinnamon chips today. You can butter and sprinkle both sides of the tortilla, or just one side, whichever is your preference.

Can I Add Other Fruits to Fruit Salsa and Cinnamon Chips?

Next time I make this salsa, I think I will try putting a fresh peach in with it. What do you think? We will have to try peaches and see what we think. 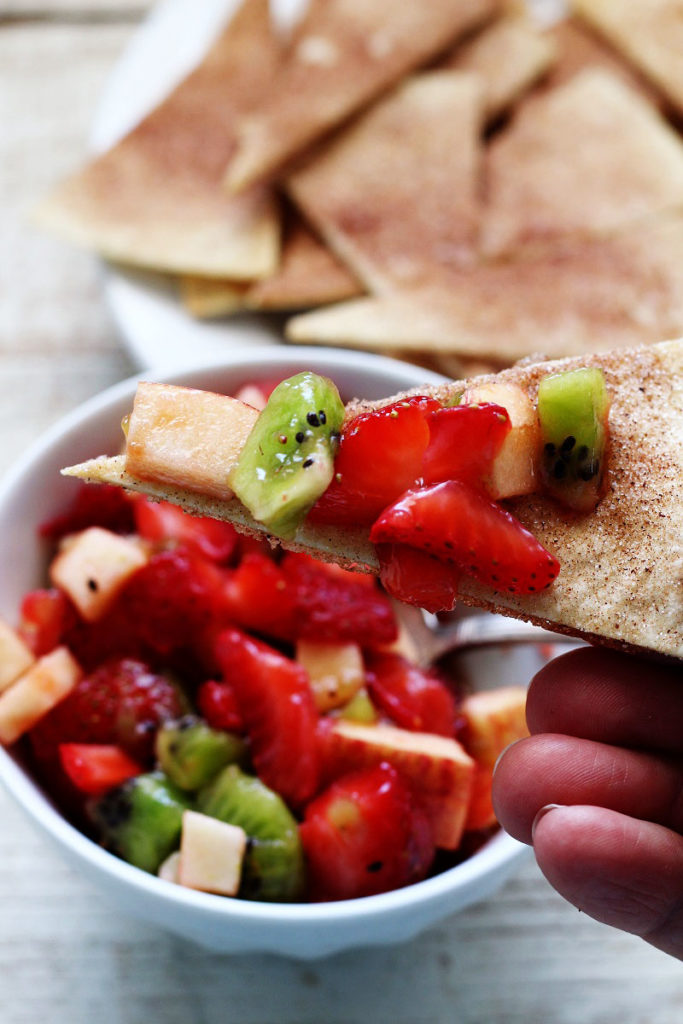 You are not going to believe this, but the other night it was about dusk and I went outside to find my husband. I go into the back yard and he says to me, you don’t want to come back here. And I asked him why not, did you do something to my garden?

He said “no, there is a critter back here that you won’t want to see”!! I asked him “what is it, is it a snake”? He said “no, it is a big River RAT”. “Oh my, I think that I will go back into the house,” I told him. My son had been kayaking and we think that this river rat must have climbed into his kayak and came home with him.

We have been here 20 years and we have never seen any kind of rat here before. We do have a dog, and she never even barked or noticed it. My husband found it when he went to feed the dog. So anyway that was a little crazy!

What Ingredients Do I Need For Fruit Salsa and Cinnamon Chips?

Here’s a list of ingredients you’ll need to make this Snack (scroll down for the full recipe):

How Do I Make Fruit Salsa and Cinnamon Chips?

Here’s the simple steps you’ll follow to make this Snack (scroll down for the full recipe): 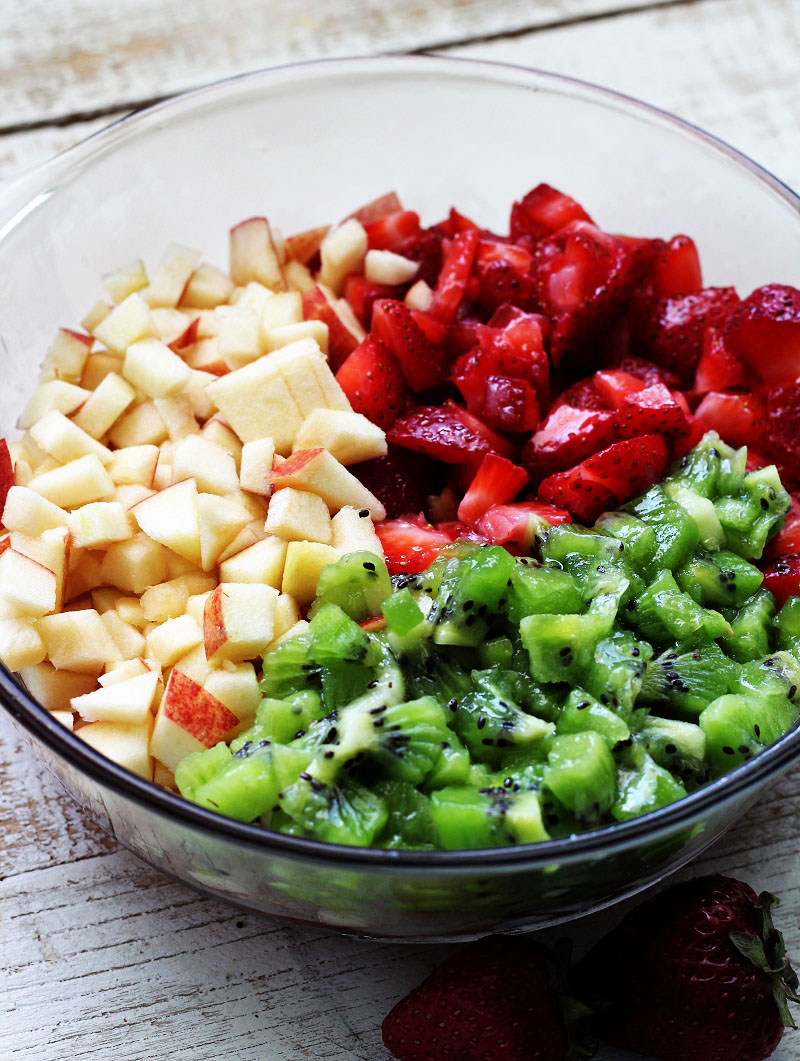 We watched for about 10 minutes and I said to my hubby, “it feels rather muggy out here, I think that I will go inside”. So he put the garage door down and came in too. I was in the laundry room doing laundry and thought, I better go bring the dog in the house. So I did.

Can I Use Corn Tortillas Instead of Flour Tortillas For Cinnamon Chips?

It wasn’t more than a couple of minutes later when I hear this big boom and see fireworks going off right on our driveway. I call him to come and he said “Oh wow, there were some fireworks that just shot past our front door”. Then I told him that there had been some going off on the driveway and that I was pretty sure that some of their fireworks had gotten away.

He went outside to see what was going on, and when he came back inside, he found out that the neighbors just across the street, had 3 different fireworks that had gotten away from them! One came over and hit our garage door, bounced off and blew up in the drive way.

Let me tell you, I am so glad that we had guardian angels that night and that we had gone into the house. It could have hit us or come into the garage and caught the garage on fire. That was a lot of adventure for one night! And if your wondering why we did fireworks on the 24th of July, here in Utah we celebrate it for Pioneer Day. I will be honest with you, I am rather glad that fireworks season is over. Why? Because it makes it a lot easier to sleep at night. 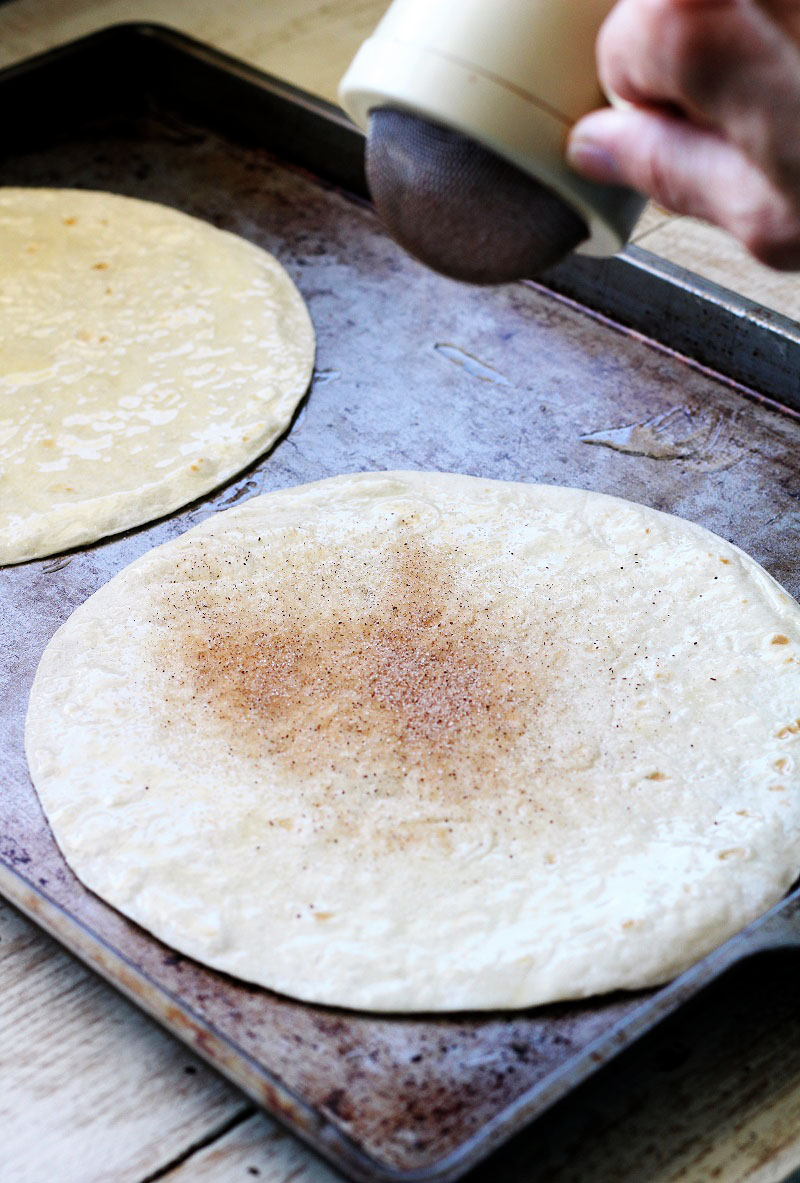 Tips and Tricks For Fruit Salsa and Cinnamon Chips:

More Fruit Recipes for you to Enjoy: